Premium Leisure Corp.'s Board of Directors is responsible in fostering the long-term success of the Corporation,--to sustain its competitiveness and profitability in a manner consistent with its corporate objectives and the best interests of its stockholders and other stakeholders. The Board determines and reviews annually, together with Management, the Corporation’s vision, mission, goals and strategies. The Board guides and takes the lead in the development of and approves the Company’s business objectives and strategies annually, and monitors their implementation in order to sustain the Company’s long-term viability and strength. The Board of Directors shall meet at least (6) times a year, with meetings scheduled before or at the start of the year.

Mr. Ocier, 64, Filipino, is an Executive Director and Chairman of Belle Corporation. He is also the Chairman and Director of Premium Leisure Corp., APC Group, Inc., PremiumLeisure and Amusement, Inc. and the Vice Chairman of Tagaytay Highlands International Golf Club, Inc. and Highlands Prime, Inc. He is the Chairman and Director of Tagaytay Midlands Golf Club, Inc., The Country Club at the Tagaytay Highlands, Inc., The Spa and Lodge, Inc. Mr. Ocier is also the Chairman, President, and Chief Executive Officer of Philippine Global Communications, Inc., Chairman and President of Pacific Online Systems Corporation, and Chairman of Total Gaming and Technologies, Inc. He is a Director of Leisure and Resorts World Corporation. He also sits as a Director for the following unaffiliated corporations: lVantage Equities, Philequity Management, Inc., Abacore Capital Holdings, Inc. and Toyota Corporation Batangas. He was formerly President and Chief Operating Officer of Eastern Securities Development Corporation.

Mr. Ocier graduated from Ateneo de Manila University with a Bachelor of Arts degree in Economics. ln recognition of Mr. Ocier's corporate leadership and role in providing employment opportunities to Filipinos, the University of Batangas conferred him a degree in Doctor of Humanities, honoris causa.

Mr. Tanjuatco, 73, Filipino, is an Independent Director of Premium Leisure Corp., IP Ventures, Inc., and a Director of Ketmar Fast Food Corporation and MCORD Fast Food Corporation. Previously, he served in the same capacity on the board of Insular Savings Bank and Asiatrust Development Bank. A career banker, he was the former President of Export and Industry Bank and was assigned to various managerial and executive positions at Credit Agricole Indosuez in Manila, New Zealand and Hongkong, where, after 21 years, he retired as Deputy General Manager in Manila.

Mr. Villacorta, 75, Filipino, is a Non-Executive Director of Premium Leisure Corp. He is also a director of BDO Finance Corporation and Bayan Group of Foundations. Prior to these, he was a Director of BDO Leasing and Finance, Inc., Equitable PCI Bank, EBC Insurance Brokerage, and Maxicare Healthcare Corporation. He was the former Chairman of EBC Strategic Holdings Corporation, EBC Investments (now BDO Strategic Holdings), Jardine Equitable Finance Corporation, Strategic Property Holdings, PCIB Properties, Equitable Data Center, and PCI Automation Center. He was a past President and CEO of Banco De Oro Universal Bank and TA Bank of the Philippines, and was Vice President of the Private Development Corporation of the Philippines. He was Senior Adviser and BSP Controller of Equitable PCI Bank and PBCom, and Adviser to the Board of PCI Capital Corporation. Mr. Bautista is currently a non-executive director in Cosco Capital, Inc., Philippine Bank of Communications, Alphaland Corporation, Airspeed International Corporation, Gothong Southern Shipping Lines, Inc., and International School of Sustainable Tourism. He is likewise the Vice Chairman of the Philippine Eagle Foundation and a member of the Board of Trustees of the University of the East and the UE Ramon Magsaysay Medical Memorial Center. 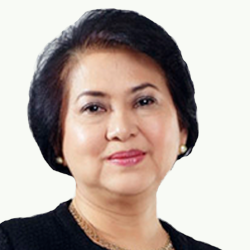 Atty. Tan, 65, Filipino, is the former Chairperson of the Commission on Audit, Undersecretary of Finance and Commissioner of the Presidential Commission on Good Government. She is currently a Trustee of the International Budget Partnership, an international NGO based in Washington DC, USA. She is an Independent Director of the Asia United Bank, a director of several Philippine corporations, a tax consultant and legal adviser of some private clients, and an accredited Arbitrator of the Construction Industry Arbitration Commission, Philippines and Philippine Dispute Resolution Center, Inc, Philippines.

Atty. Tan served as Chairman of the United Nations Independent Audit Advisory Committee, the first Filipino to have been elected to this 5-member Committee. She is also a professor at the University of the Philippines for Mandatory Continuing Legal Education.

Backed by four decades of professional work in the Philippines and abroad as private law and accounting practitioner, government official, arbitrator and international consultant, she is an expert in the fields of legal, finance, audit, governance, dispute resolution and administration.

She graduated from the University of the Philippines in 1977 with a degree in Bachelor of Science in Business Administration and Accountancy and in 1981 with Bachelor of Laws. In 1987, she obtained her Master of Laws (Tax) from the New York University. Mr. Tiu holds a Bachelor of Science degree in Commerce (Major in Marketing) from the University of British Columbia.

(Please refer to above profile)

Mr. DyBuncio, 61, is an Adviser to the Board of Directors of Premium Leisure Corp. (PLC), Belle Corporation and APC Group, Inc. Prior to this, he served as President and CEO of PLC and Belle Corporation. He is the President of SM Investments Corporation and 2Go Group, Inc. and the Vice Chairman of the Board of Atlas Consolidated Mining and Development Corporation. Before joining SM Investments Corporation and holding several positions in companies under the same, Mr. Dybuncio made a name for himself as a career banker. He spent over 20 years with JP Morgan Chase and its predecessor institutions. During this time, he was assigned in several major cities including New York, Seoul, Bangkok, Hong Kong and Manila. He graduated from Ateneo de Manila University with a Bachelor of Science degree in Business Management and obtained his Master’s degree in Business Administration program at Asian Institute of Management.

Adviser to the Board

Mr. Ongsip, 47, Filipino, is the Vice President for Finance and Chief Financial Officer (CFO) and Treasurer of the Company. He is also the Vice President for Portfolio Investments of SM Investments Corporation, Executive Vice President, CFO and Treasurer of Belle Corporation. He is also a director, and the President and Chief Executive Officer of APC Group, Inc. since August 13, 2015. Mr. Ongsip is also a Certified Public Accountant with an extensive audit and finance background accumulated from 5 years in external audit with SyCip, Gorres, Velayo & Co., 11 years with Globe Telecom and 9 years now with the SM Group. He graduated from the University of Santo Tomas with a Bachelor of Science in Accountancy.

Atty. Serrano, 53, Filipino, is the Corporate Secretary and Corporate Information Officer of the Company. Mr. Serrano is a practicing lawyer specializing in Mergers & Acquisitions, Capital Markets and Banking & Finance. In 2020, the International Financial Law Review (IFLR) named Atty. Serrano as an IFLR Asia Best Lawyer 2020, one of only 11 lawyers from the Philippines, following his consistent ranking in IFLR1000 as a “Leading Lawyer – Highly Regarded” in all three practice areas.

The Legal500 Asia Pacific also recognized Mr. Serrano as a “Leading Individual” in Banking & Finance, after constant citation as a “Recommended Lawyer”.

Mr. Serrano is a director of 2GO Group, Inc. He is Corporate Secretary of a few of the largest and most respected publicly listed companies in the Philippines, including SM Investments Corporation, SM Prime Holdings, Inc., Premium Leisure Corp., Crown Equities, Inc., as well as various subsidiaries of BDO Unibank. He is also Corporate Secretary of, or counsel to, prominent banking industry associations and companies such as the Bankers Association of the Philippines, PDS Group of Companies and the Philippine Payments Management, Inc.

Mr. Serrano is a Certified Associate Treasury Professional (2017) and was among the top graduates of the Trust Institute of the Philippines in 2001. Mr. Serrano holds a Juris Doctor degree from the Ateneo Law School and a BS Legal Management degree from Ateneo de Manila University.